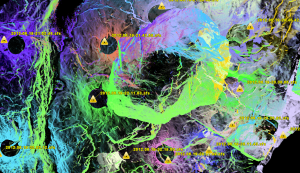 My intention was to use the light from the headtorch to leave a trace or path across the rock face. I’d seen some other examples of this technique being used both in and out of a climbing context. I wanted to firstly experience bouldering at night and see how useful a headtoch would be in terms of ‘drawing with light’.

I know Clodgy very well, so the terrain was familiar but the experience was new. At night everyhting seems different, a slip or fall would be uncomfortable at best and dangerous at worst. We walked out at dusk, the light from headtorches made things worse, so we stumbled along in the gloom. Although dry it was a bit misty, the light was drawn in smudges and smears and an owl caught my eye with shiny reflective dishes sitting on a rock in front of a dark sea.

At the boulder, last light left an intense dark band across the horizon. The torches and lanterns we had brought with us brought night. The boulder loomed large and dramatically in the artificail light from headtorches and lanterns. The ground under my feet felt hard and threatening. I had no idea how I would climb in these circumstances. I was going to climb ‘Northern Track’  13/14 move problem that crosses the steep face and moves onto less steep ground. I’ve done this problem hundreds of times, so the moves and movements are familiar, rehearsed endlessly they are part of a physical memory. But, I had no idea how this would work in the dark. I sat down under the first moves and looked at the next hold, it looked a lot further away than usual, a blank dark filled the space between the starting holds and the hold I had to go to. My headtorch osciallated and wobbled and focussed between the start and the hold. I pulled on and lunged upward, I hit the hold fine, that was ok at least. The unknown was becoming known. I looked at the next hold and my headtorch cast a positive and bright light on the chalked surface, i reached across and then had to move my feet, again the torch flooded the area around the foothold. It became clear and in retrospect it was obvious that were ever my gaze went the torch beam went too. climbing requires the eye to first to scan the site or place that hand of foot must go. The process of the night bouldering with a headtorch simply revelead what I allready knew in an embodied an unconscious sense that sight is the first sensory engagement in the bouldering experience, the headtorch beam became the trace or mark of that first engagement. The trace in the photographs with all its jumpy and jerkiness is a representation of that process.

Looking at the photograph(s) they seem perfect in many ways. They carry a resonance of a trace of an ephemeral experience. Unlike a conventional still which isolates a moment in the climb, these photographs maintain a record of the complete problem. A film or video it could be argued would be similar, yet these images in the abstarction that takes place allows a clarity in fragment or moment, ie a hand appears out of the blur, a foot shadow drags across the bottom of the image and boulder, these isolated moments have a similarity to the lived experience of the climb. I can’t remember in detail every move, only fragments and details re occur in mememory, the feel of hand on a hold, the snag of a foot on a tiny yet crucial nobin of rock. These are what I can  recall and these photographs carry an essence of that experience.